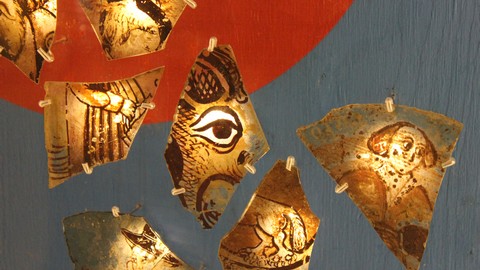 After the huge fire in Ribe in 1580, a large number of the houses in the town had to be rebuilt. Many elegant, gabled, half-timbered houses filled out with brick were constructed. Maybe builders used material from the demolished churches and monasteries, which were closed down after the Reformation, in the construction of the new houses.

According to the fashion of the time, they were fitted with leaded glass windows.

It was not possible at the time to make large, flat glass panels, so lots of small pieces in a variety of shapes (pane-shaped, rectangular, circular etc.) were framed in led mullions and assembled to form large window sections, as you can see, for example, in the basement room of ‘Quedens gård’ in Sortebrødregade.
These small panes could be made from coloured glass and painted with beautiful motifs, through which the light radiated.

Not many glass paintings have been preserved from that time, so it was a bit of a treasure trove when a glazier’s waste heap was excavated in Peder Dovn’s Alley in the 1960s.
It contains hundreds of fragments of small windowpanes from Ribe’s Renaissance houses with painted motifs portraying men and women in the clothes of the time, or flora and fauna and exquisite patterns.