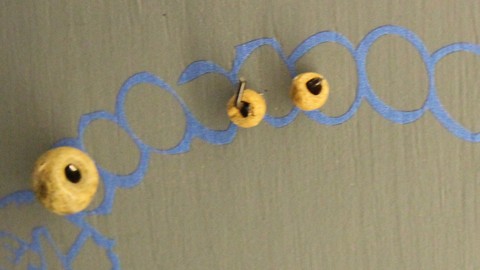 The worship of the Virgin Mary was prolific during the Late Middle Ages. Mary was the Queen of Heaven, and the protector and mother of mankind. Her intercession with God on behalf of mankind is often portrayed in the art of the Late Medieval Period.

Since she had a close connection to the Almighty, if she listened to your prayers, this was of enormous help.
In itself, Mary’s name possessed wondrous powers. Her name alone was enough to frighten off the Devil.
Her name often appears as the first part of the Angel Gabriel’s Annunciation: Ave Maria Gratia Plena etc., the so-called ‘Ave Maria’ prayer.

Rosaries became popular in the Late Middle Ages as worship of the Virgin Mary increased. They were small strings of 55 beads, alternating between 10 little ones and 1 big one. The little beads represented ‘Ave Maria prayers’, and the big beads ‘Pater Noster’ prayers.

One favourite motif in medieval art is the Madonna and Child, surrounded by a rosary, in which Jesus’s wounds on his feet, hands and heart make up the big beads. The rosary was a symbol of Mary.

Now and again, beads from rosaries are found in archaeological excavations, but in the Greyfriars cemetery there were six burial places, where each of the deceased had a rosary in his hand.
Maybe they believed that it would help the dead on Judgement Day, because the rosary symbolised a