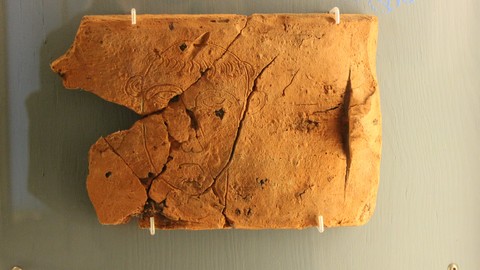 A find from Greyfriars Monastery (established 1232) clearly demonstrates the relationship between an employer and a worker in the shape of a roof tile with an engraved drawing of an obviously irate monk.

It was found in several parts in the area of Greyfriars Monastery in Ribe – originally part of a roof in the monastery complex, but with the drawing facing inwards so it was not immediately visible.

We know that the Greyfriars had a brickworks near Ribe, where clay was fired for construction materials. This roof tile was probably manufactured there.
The following scenario is a plausible explanation of the drawing:

The workers at the brickworks received a visit from one of the monastery’s monks, who reprimanded them because of a missed deadline or inefficiency, or who just happened to be particularly unpleasant and arrogant.
Once the monk had left, one of the workers had the nerve to draw a caricature on one of the still wet tiles as it lay drying. The workers had a good laugh at the thought of the drawing sitting on the roof of the monastery building.
The construction worker, who later fitted the tile on the roof, must also have been in on the joke.