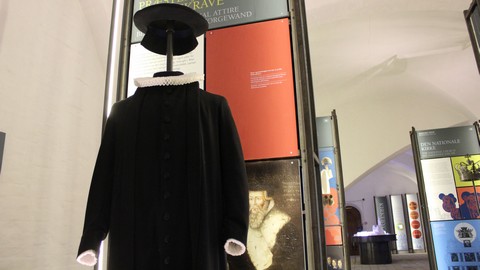 The Protestant bishop’s vestments are reminiscent of the vestments, which the clergy still wear today in the Danish National Church. The reconstructed vestments in the exhibition are based on visual sources from the Reformation.

For example, one of the sources is the painting of Hans Tausen (Bishop 1541-61), wearing ermine-lined clergyman’s vestments, and a hat and ruff. The painting hangs in the Cathedral.

The vestments, which, after the Reformation, were worn by both clergymen and bishops, were much less ostentatious than the Catholic version.
Outside church services they wore the black robes as worn by students and scholars.

The latter were given then upon admission to university, regardless of whether they were studying Law, Medicine or Theology.
By adding the ruff, which was modern at the time, the clergy resembled ordinary people in the parish: a symbol of the fact that we are all equal in the eyes of God.

The vestments also included a hat, from which, at funerals, black mourning ribbons could hang down the neck, and a type of black leather shoe that was common around the time of the Reformation.

The white ankle-length kirtle, the alba, was still used at the altar during church services, accompanied by a chasuble, which might often be decorated with a cross.

The actual vestments have not altered much since the time of the Reformation, while the style of the ruff has varied slightly over the years.