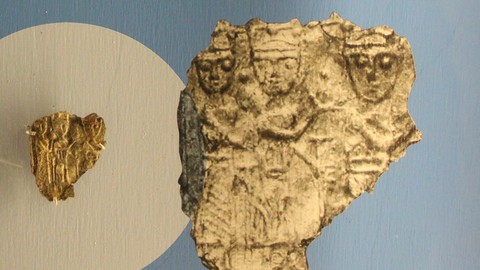 While excavating in Ribe, South West Jutland Museums occasionally find pilgrim badges from the Middle Ages. They are small souvenirs cast in metal from journeys to pilgrimage sites, and were usually sewn onto clothes as little amulets, as proof that the wearer was a pious person and should be treated well.

One very popular destination was Cologne, where you could visit the relics of the Three Wise Men, which were placed in a precious golden shrine in the city’s cathedral.
The Three Wise Men were among the most popular saints of the Middle Ages. They were invoked in the context of a wide range of diseases and ailments, and protected travellers.

Pilgrim badges from Cologne portray the Three Wise Men worshipping the infant Jesus, who is sitting on Mary’s lap. Two of these badges were found on different occasions in Ribe.
The back of one, which can be seen in the Cathedral Museum, is engraved with an image of the Crucifixion.

The phenomenon of having an image or a text on the back of a jewel etc., is well known and associated with people’s belief that a particularly powerful amulet should be secret or not directly visible.