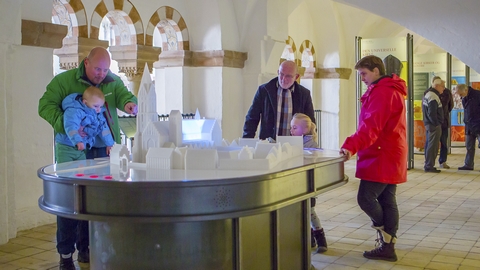 The exhibition features a model of the Cathedral and its surroundings from the time that it was at its highest. The model, which portrays the Cathedral’s architectural history using sound and light, is based on written sources and studies conducted by building archaeologists and archaeologists.

Recent excavations during the renovation of the Cathedral Square have provided new knowledge, not only about the layout of the Square, but also about the oldest Christian cemetery, which dates all the way back to the time of Ansgar in the 9th century.

It all began with the first timber church surrounded by a circular cemetery with thousands of early Christian graves.

Then, around 1100, came the first stone church, built using a mixture of domestic and imported stones.

In the mid-12th century, work began on the present Cathedral, which was expanded during the Middle Ages with towers, a canonical monastery, ambulatory and chapels.

The completed Late Medieval church was encircled by a cemetery wall, and there were a number of buildings in the area: for example, canonical residences.
The Middle Ages witnessed dramatic events, including a collapsing tower and fires.

Following the Reformation, a number of the medieval extensions were demolished. This, together with the restoration of the church around 1900, resulted in the appearance it has today.