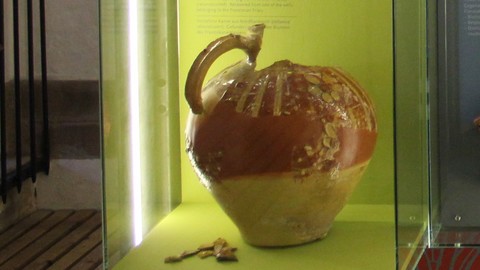 In addition to the Cathedral, during the Middle Ages Ribe saw the construction of a large number of churches, monasteries, convents and chapels. One of them was Greyfriars Monastery, which was established in 1232 and evolved into a huge building complex during the Middle Ages. Many of the monastery’s buildings and much of its land have been excavated, and South West Jutland Museums have many splendid finds from the site.

One of them is this large pitcher, fragments of which were found in a waste pit on the site of the monastery. After being found, the pitcher was glued together, and the missing parts were reconstructed.

It was made in Northern France and shipped here by foreign merchants. At excavation sites in Ribe, archaeologists very often find shards of pottery, which were imported mainly from Germany, France and the Netherlands, including shards from pitchers of the same type as this one.

However, what make this large pitcher so unusual are its size, its very thin walls and its capacity of several litres.
It must have been very difficult to use and fill this pitcher with liquid. The contents would have been too heavy for its handle and walls.

The pitcher bears witness to the strong trade links, which Ribe had with other places in Northern Europe, and to the demand for luxury goods such as this, which may only have been for decoration.
One wonders how the monks used the pitcher in the monastery.
Was it a table decoration or did it adorn a niche in one of the monastery’s walls?